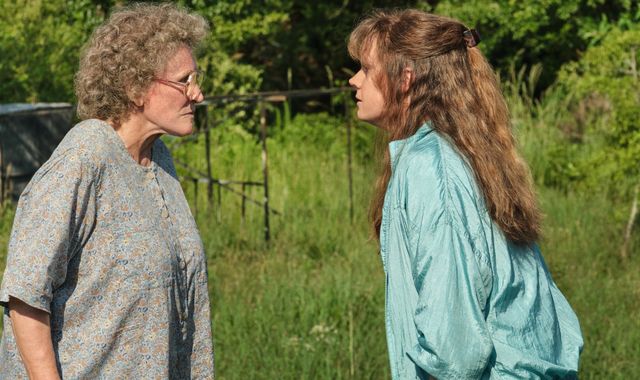 Amy Adams and Glenn Close are both actresses revered for being at the top of their game.

Between them the pair have 13 Oscar nominations, and Close even holds the dubious record as the actress who has received the most Oscar nods without winning.

Any cast would be bolstered by having just one of them on board, but new film Hillbilly Elegy - based on the best-selling memoir about an Appalachian family and the social problems they faced in Middletown, Ohio - sees them teaming up to play real mother-daughter pair "Mamaw" and Beverley.

Both told Sky News' Backstage podcast that the other was a "dream" to work with.

"Her attention to detail inside of her craft and getting to watch her develop the character - if you're lucky you get to learn from the people you work with, and I learnt so much from her," Adams said of Close.

"When you're working with people who've worked that hard and spent so much time on and detail to the character, you kind of get into this strange zone where you don't know what's real and what isn't.

"And I felt that with Glenn, where you just, you feel like you're able to go in any direction and they'll be right there with you… She really is just a dream of a scene partner and a dream of a human being."

Close was similarly complimentary about Adams.

"Technique and craft matter, I have a huge respect for the craft of acting, but I also love to not be aware of craft when I watch other people's work," she said.

"That's kind of the key, and Amy is just at the top of her craft, and it was a dream.

"You just can fly because you're with somebody who is the best of the best and it gives you wings."

Adams' character Bev has addiction issues and, as the film is told through the eyes of her son J D, the audience quickly sees how this impacts her ability to be a good mother.

Adams said getting to know the woman behind the character helped her to balance what was on the page, with the real life family.

"I always want to honour the story and, you know, honour the writing that I've been given, but always keeping in mind to find the humanity inside of the character," she said.

"And Beverly is ... she is fun, she's smart, she lights up a room - she's one of those people that comes in the room and, you know she's there.

"And so I really enjoyed meeting her, I really liked her, and I also love that she's doing so well now, and so that that really gave me - I felt like I had more permission to dive into her struggles because she's doing great."

Close plays Bev's mum - the no-nonsense, chain-smoking 'Mamaw' who gets many of the movie's best lines, but also has her own troubles.

"I just loved her as a character," Close explained.

"Mamaw was known for these incredible things that would come out of her mouth, and I was given, you know, wonderful, wonderful lines, it's fun to have writing like that.

"But it was also very true to the real Mamaw, she had this incredible, wicked sense of humour and loved to make people uncomfortable and was a very much larger than life person in this family, so there's a lot to build her on."

Director Ron Howard described the character - and the woman she's based on - as "not to be missed".

"We even played that woman down a little bit, believe it or not," he told Sky News' Backstage podcast.

"That was an outrageous lady, but she accomplished so much late in her life by finding this reservoir of strength to really to really help this boy."

Howard, who bought the rights to the book after reading it and speaking to author J D Vance, said he's no stranger to the balancing act of making a movie for entertainment, based on real people's lives.

"You're going to wind up having to look at those people, at least the ones who are still alive, and I've had that experience a great deal, whether it was, you know, David Frost or Niki Lauda, the astronauts in Apollo 13, so it's something I'm well aware of," he said.

"Yet you also have to explain that this is a creative interpretation and people recognise that.

"The Vance family was difficult because it's an edgy, raw story, it's full of trauma and abuse, and yet, I think because J D's mother… she has evolved and grown as a person, she's healthier, I think she feels that sharing her story is kind of an offering and that there's something to be learnt."

Hillbilly Elegy is out on Netflix on the 24 November. Listen to our review on this week's episode of Backstage Podcast.