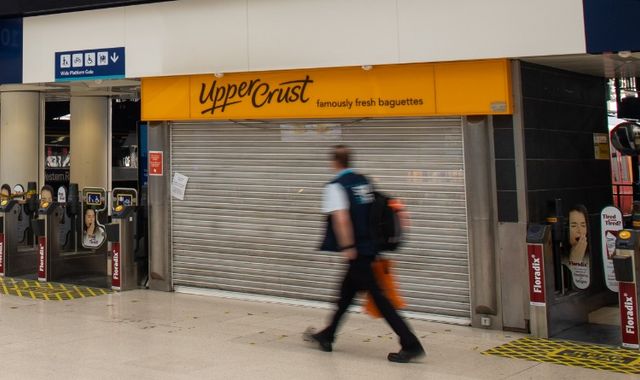 The grim toll of coronavirus-related job losses will rise again on Wednesday when the company behind the Upper Crust catering brand discloses plans to make more than half of its UK workforce redundant.

Sky News has learnt that SSP Group, which has seen its revenues decimated by the impact of the pandemic on international travel, will unveil plans to axe up to 5,000 jobs in a statement to the London Stock Exchange.

Insiders said the cuts would be spread across SSP's British operations, and could impact 55% of the 9,000-strong workforce employed by SSP during the peak summer period.

The savage scale of the potential restructuring underlines the fact that travel industry revenues have not yet begun to recover in a meaningful way since the end of the UK-wide lockdown, with major airports barely functioning because of the government's 14-day quarantine policy.

About 580 of SSP's sites, which include those trading under the Caffe Ritazza brand, are located in the UK.

A message circulated among staff on Tuesday, part of which has been seen by Sky News, said the company had "come to the very difficult conclusion that we will need to simplify and reshape our business and, from tomorrow, we will be starting a collective consultation on a number of proposed changes to the business".

It added: "This includes a proposed reorganisation which could lead to a headcount reduction of up to c.5,000 across SSP Group, SSP Finance and SSP UK, which includes all head office colleagues and both salaries and hourly paid colleagues in operations."

SSP traded before the COVID-19 crisis from approximately 2,800 units in airports, train stations, motorway services stations and other leisure-related sites.

The company says it served 1.5m customers daily in 35 countries, including at 180 airports and 300 rail stations.

SSP, which employs 9,000 people in the UK, declined to comment.

A source close to the company said its chief executive, Simon Smith, and its board had taken 30% pay cuts until at least September.

It has twice raised money from shareholders during the pandemic to shore up its balance sheet.

Announcing its interim results earlier this month, Mr Smith said SSP's response had been "to take quick and decisive action to protect our people and our business, whilst around the world our colleagues have helped and supported their local communities".

"Looking forward, and with sufficient liquidity to manage a pessimistic trading scenario, I believe the actions we have been taking during this crisis will make us a fitter and stronger business, well placed to deliver for all our stakeholders as the travel market recovers," he said.